Not many years ago a young married lady was journeying alone.

It is not customary in India for young women, even if married, to go out by themselves. The purdah system unfits them for independence. Even when going for a short distance by palanquin or just for a carriage drive, a chaperon is necessary.

Yet occasions arise when it is imperative that they should journey, but no suitable escort can be found or spared for the purpose. They are then obliged to go with servants. It may seem strange that young ladies should be permitted to travel alone with servants. But readers who know India will not be surprised, for Indians treat their servants after the patriarchal system, especially those who have served the family for generations. Even hired attendants, like the driver in this story, are thoroughly trusted when known to the family.

The young lady was on her way to visit her father and mother. Indian parents-in-law cannot visit at the parental home of their daughter-in-law. Therefore bow-ma journeyed alone with her little son, a child of about five years of age.

The distance was not a long one, only from Calcutta to Durgapore, a village a few miles away from the city. So a hackney-carriage was hired with a driver who had often before been employed by her father-in-law, and everyone felt assured bow-ma would reach her destination safely.

Her mother-in-law saw her into the carriage. Her little boy was lifted up beside her, and, with many injunctions to drive carefully and with speed ringing in his ears, the driver whipped up his horses and they were off.

Bow-ma knew the road well. Often had she journeyed to and fro in the early years of her married life, and even after the birth of her little son her visits to her parents had been frequent.

The carriage was close and her heavy silken saree hot to wear, so she opened the venetians and lazily watched the familiar landmarks as they passed. She had started early so that the journey should be accomplished in day-light, and still they did not reach home. She noted the various trees and hedges and was puzzled. Surely, the road seemed different. The sun, a ball of golden fire, sank to rest in a bed of many-tinted clouds, and still they had not arrived. Bow-ma felt strangely anxious.

The carriage suddenly swerved. To her dismay she saw they had turned into a rough and untravelled road with paddy-fields on either side. The place seemed lonely. It was now rapidly growing dark, for in India after sun-set Night does not long delay her coming. A presentiment of evil clutched bow-ma’s heart. She whispered to her little boy to ask the driver where they were and when they should arrive. In India it is not permitted a woman to address any man save her husband, father, and brothers.

The child obeyed but the driver made no reply. “Ask again,” whispered the mother, “he has not heard you.”

The boy asked, “When shall we arrive?” again and again, but not a word answered the driver.

Bow-ma, now thoroughly alarmed, beat the shutters of the carriage and commanded her son to shout loudly. The boy screamed at the top of his voice, “Why don’t you reply? What road is this?”

The driver now answered disrespectfully: “You will soon know where you are going,” and laughed.

His rude gruff tone and evasive answer confirmed bow-ma’s worst fears. The awful word dacoits stood out in her mind in letters of fire. Horror and dread filled her soul. Drawing her child towards her, she hushed his eager questioning and waited in silent anguish for the coming danger.

The carriage bumped and rattled over the uneven road. Presently it stopped. It was now almost dark. The door was jerked open and a harsh voice commanded: “Get out of the carriage.” Bow-ma recognised the driver’s voice and, realising the futility of objecting, without a word she stepped down and helped her little son to alight.

“Follow me” was the next rough order. Again she silently obeyed. The man left the road and led her a little distance away under the shadow of some trees. “Take off your jewels. Give them to me.” A faint sigh of relief escaped her. Perhaps the jewels were all he wanted. Quickly she unclasped her handsome necklet and gave it him. He grasped it greedily with one hand and extended the other for more. One by one she stripped her wrists and arms of their lovely bracelets and bangles and handed them to him. “More” he growled. She pulled the rings from her fingers and added to them her ear and nose rings. “Your waist chain” he snapped. She unclasped and dropped its golden weight into those greedy hands. “Take off your anklets, I want all” he sneered. She knelt on the ground to unclasp them. Then, rising, handed them to him, wondering what more would follow.

Meanwhile the child wept bitterly, and angrily forbade the driver to take his mother’s jewels, calling him robber and thief. “Yes, dacoit I am,” the scoundrel replied to the boy’s revilings, “and if you will not be quiet, I will teach you how to.” Bow-ma gently strove to console and silence her son. “Fret not! Your father will give me more and better jewels.”

“Take off your saree” was the next outrageous command. The boy’s indignation flamed afresh. His mother took an unguarded step forward and asked: “Are not my jewels enough that you want the saree off my back?”

“Aye, your saree and all you have. Silence your child or I will kill him.” Terrible was the harsh voice in its determination. Bow-ma’s heart stood still. Entreaty would be of no avail. She unwound the richly-embroidered silken folds from about her and cast the gold and green saree at his feet: “Take it.”

“You have stripped my mother,” screamed the boy. The ruffian caught the saree with a fearful oath and turning on him said: “Now I can deal with you. I will fetch a brick from yonder kiln and pound the breath out of you,” With these words he strode forward, tying the jewels in the saree as he went. Now her sorely-tried nerves gave way, and, distracted with grief, bow-ma caught her child in her arms, and their mingled cries rent the air. But the thief did not return.

About midnight a village policeman going his rounds heard their cries. At first he paid no heed to them: jackals swarmed and disturbed the night. Again the anguished voices quivered in the air. There was something human in the sound. He stopped to listen. The cries rose again. He walked forward in their direction. Clearer, as he advanced, shrilled the distressed voices, and he recognised they were those of a woman and a child. He quickened his steps and hastened to the spot. The light from his lantern revealed bow-ma and her son, clinging to each other and weeping piteously.

“Who are you? What ails you?” he asked. The distraught mother, unconscious of the flight of time, thinking him the heartless dacoit returned to kill her boy, fell at his feet in an agony of supplication: “Spare my son. Take my life instead.”

“I am a chowkidar (watchman). What is up?” But so dulled were her ears with fear and grief that he was twice obliged to repeat his words. When the joyful intelligence reached her brain she burst into tears. “O! save my son.” Then the consciousness that the danger was past reminded her of her own plight, and she sobbed: “Give me something to wear.”

The policeman had noticed her semi-nude state. Dropping, his pugree at her feet he turned away. She shook out its many folds and draped it about her body. Then she related what had befallen her and pointed towards the direction the thief had taken.

The policeman walked cautiously forward, his lantern raised in one hand and his lathi tightly grasped in the other. A few yards ahead he came to an old brick kiln. Here, prone among the broken bricks, lay the robber in greater straits than his victims. A huge cobra was tightly coiled round his right arm, while on the left hung the saree and the jewels. The rays of the lantern disturbed the snake. With an angry hiss it uncoiled itself and disappeared. The dacoit, more dead than alive from simple fear of the snake’s fatal sting, yielded himself a prisoner, and it was subsequently discovered that the whole gang, of whom he was a member, were licensed hackney drivers. 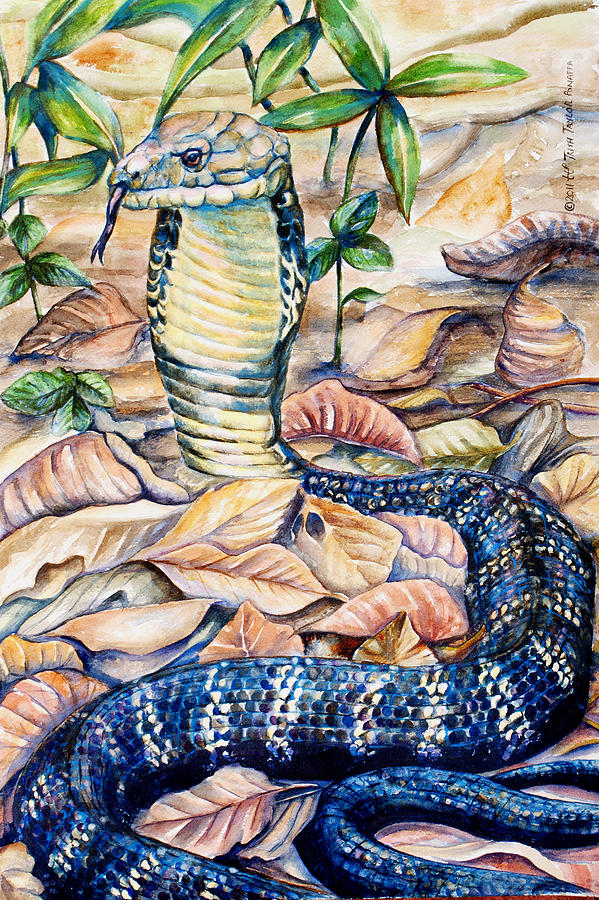