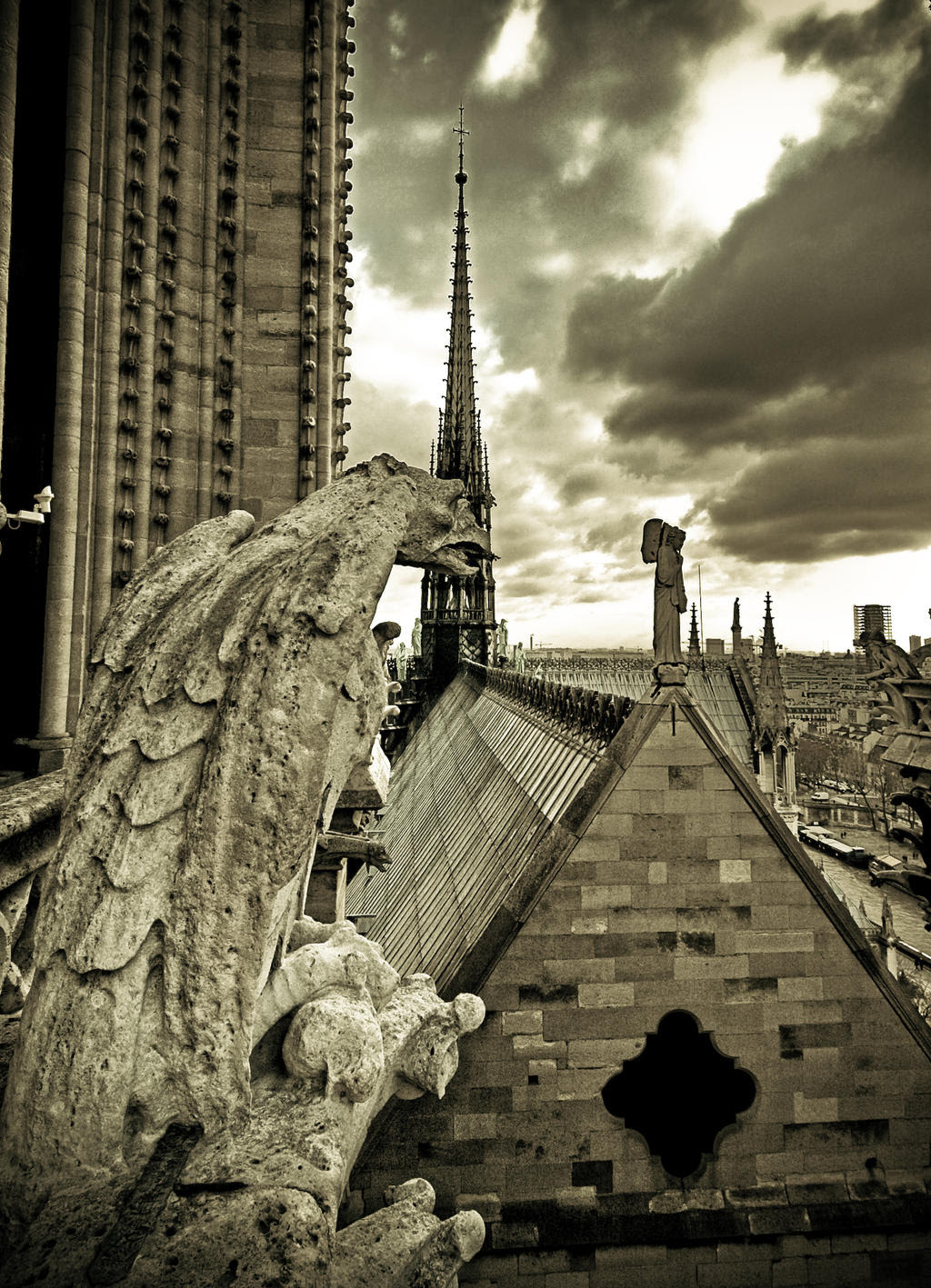 
Victor Hugo began writing The Hunchback of Notre-Dame in 1829. The agreement with his original publisher, Gosselin, was that the book would be finished that same year, but Hugo was constantly delayed due to the demands of other projects. By the summer of 1830, Gosselin demanded Victor Hugo to complete the book by February 1831. Beginning in September 1830, Hugo worked nonstop on the project thereafter. The book was finished six months later.


The story begins on Epiphany (6 January), 1482, the day of the "Feast of Fools " in Paris, France. Quasimodo, the deformed hunchback bell-ringer of Notre-Dame, is introduced by his crowning as King of Fools.


Esmeralda, a beautiful Gypsy  with a kind and generous heart, captures the hearts of many men, including those of a Captain Phoebus and a poor street poet, Pierre Gringoire, but especially those of Quasimodo and his adoptive father, Claude Frollo, the Archdeacon of Notre Dame. Frollo is torn between his obsessive love and the rules of the church. He orders Quasimodo to kidnap her, but the hunchback is suddenly captured by Phoebus and his guards who save Esmeralda.


Quasimodo is sentenced to be flogged and turned on the pillory  for one hour, followed by another hour's public exposure. He calls for water. Esmeralda, seeing his thirst, offers him a drink. It saves him, and she captures his heart.


Esmeralda is later charged with the attempted murder of Phoebus, whom Frollo actually attempted to kill in jealousy, after seeing him about to have sex with Esmeralda, and is tortured and sentenced to death by hanging. As she is being led to the gallows, Quasimodo swings down by the bell rope of Notre Dame and carries her off to the cathedral under the law of sanctuary.  Clopin, a street performer, rallies the Truands (criminals of Paris) to charge the cathedral and rescue Esmeralda.


Frollo asks the king to remove Esmeralda's right to sanctuary so she can no longer seek shelter in the church and will be taken from the church and killed. When Quasimodo sees the Truands, he assumes they are there to hurt Esmeralda, so he drives them off. Likewise, he thinks the King's men want to rescue her, and tries to help them find her. She is rescued by Frollo and her phony husband, Gringoire. But after yet another failed attempt to win her love, Frollo betrays Esmeralda by handing her to the troops and watches while she is being hanged.


When Frollo laughs during Esmeralda's hanging, Quasimodo pushes him from the heights of Notre Dame to his death. Quasimodo then goes to the vaults under the huge gibbet of Montfaucon, and lies next to Esmeralda's corpse, where it had been unceremoniously thrown after the execution. He stays at Montfaucon, and eventually dies of starvation. About eighteen months later, the tomb is opened, and the skeletons are found. As someone tries to separate them, Quasimodo's bones turn to dust.


The original French title, Notre-Dame de Paris (the formal title of the Cathedral) indicates that the Cathedral itself is the most significant aspect of the novel, both the main setting and the focus of the story's themes. With the notable exception of Phoebus and Esmerelda's meeting, almost every major event in the novel takes place in the cathedral, atop the cathedral or can be witnessed by a character standing within or atop the cathedral.


The Cathedral had fallen into disrepair at the time of writing, which Hugo wanted to point out. The book portrays the  Gothic era as one of the extremes of architecture, passion, and religion. The theme of determinism (fate and destiny) is explored as well as revolution and social strife.


The severe distinction of the social classes is shown by the relationships of Quasimodo and Esmeralda with higher-caste people in the book. One can also see a variety of modern themes emanating from the work including nuanced views on gender dynamics.

For example, Phoebus objectifies Esmerelda as a sexual object. And, while Esmeralda is frequently cited as a paragon of purity — this is certainly how Quasimodo sees her — she nonetheless is seen to create her own objectification of the archer captain, Phoebus, that is at odds with reader's informed view of the man. 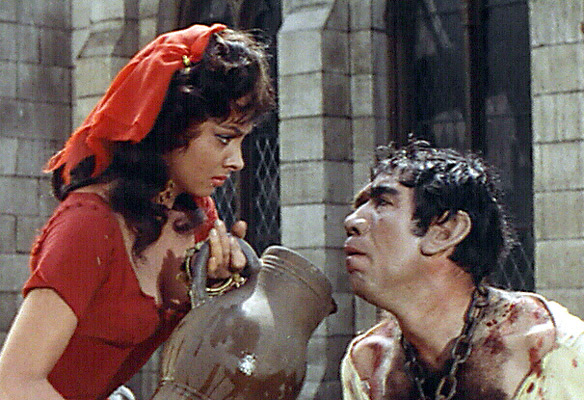 Since I have set my lips to your full cup, my sweet,
Since I my pallid face between your hands have laid,
Since I have known your soul, and all the bloom of it,
And all the perfume rare, now buried in the shade;

Since I have known above my forehead glance and gleam,
A ray, a single ray, of your star, veiled always,
Since I have felt the fall, upon my lifetime's stream,
Of one rose petal plucked from the roses of your days;

I now am bold to say to the swift changing hours,
Pass, pass upon your way, for I grow never old,
Fleet to the dark abysm with all your fading flowers,
One rose that none may pluck, within my heart I hold.

Your flying wings may smite, but they can never spill
The cup fulfilled of love, from which my lips are wet;
My heart has far more fire than you can frost to chill,
My soul more love than you can make my soul forget 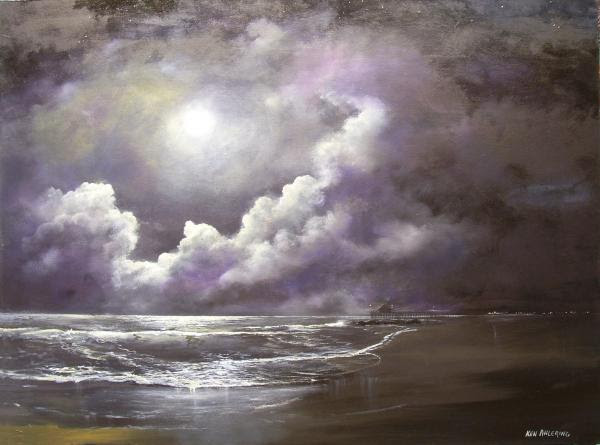 We walked amongst the ruins famed in story
Of Rozel-Tower,
And saw the boundless waters stretch in glory
And heave in power.

O Ocean vast! We heard thy song with wonder,
Whilst waves marked time.
"Appear, O Truth!" thou sang'st with tone of thunder,
"And shine sublime!

"The world's enslaved and hunted down by beagles,
To despots sold.
Souls of deep thinkers, soar like mighty eagles!
The Right uphold.

"And you who love no pomps of fog or glamour,
Who fear no shocks,
Brave foam and lightning, hurricane and clamour,--
Exiles: the rocks!"

I love the evenings, passionless and fair, I love the evens,
Whether old manor-fronts their ray with golden fulgence leavens,
In numerous leafage bosomed close;
Whether the mist in reefs of fire extend its reaches sheer,
Or a hundred sunbeams splinter in an azure atmosphere
On cloudy archipelagos.

Oh, gaze ye on the firmament! a hundred clouds in motion,
Up-piled in the immense sublime beneath the winds' commotion,
Their unimagined shapes accord:
Under their waves at intervals flame a pale levin through,
As if some giant of the air amid the vapors drew
A sudden elemental sword.

The sun at bay with splendid thrusts still keeps the sullen fold;
And momently at distance sets, as a cupola of gold,
The thatched roof of a cot a-glance;
Or on the blurred horizon joins his battle with the haze;
Or pools the blooming fields about with inter-isolate blaze,
Great moveless meres of radiance.

Then mark you how there hangs athwart the firmament's swept track,
Yonder a mighty crocodile with vast irradiant back,
A triple row of pointed teeth?
Under its burnished belly slips a ray of eventide,
The flickerings of a hundred glowing clouds in tenebrous side
With scales of golden mail ensheathe.

Then mounts a palace, then the air vibrates--the vision flees.
Confounded to its base, the fearful cloudy edifice
Ruins immense in mounded wrack;
Afar the fragments strew the sky, and each envermeiled cone
Hangeth, peak downward, overhead, like mountains overthrown
When the earthquake heaves its hugy back.

These vapors, with their leaden, golden, iron, bronzèd glows,
Where the hurricane, the waterspout, thunder, and hell repose,
Muttering hoarse dreams of destined harms,--
'Tis God who hangs their multitude amid the skiey deep,
As a warrior that suspendeth from the roof-tree of his keep
His dreadful and resounding arms!

All vanishes! The Sun, from topmost heaven precipitated,
Like a globe of iron which is tossed back fiery red
Into the furnace stirred to fume,
Shocking the cloudy surges, plashed from its impetuous ire,
Even to the zenith spattereth in a flecking scud of fire
The vaporous and inflamèd spaume.

O contemplate the heavens! Whenas the vein-drawn day dies pale,
In every season, every place, gaze through their every veil?
With love that has not speech for need!
Beneath their solemn beauty is a mystery infinite:
If winter hue them like a pall, or if the summer night
Fantasy them starre brede.

Take heed of this small child of earth;
He is great; he hath in him God most high.
Children before their fleshly birth
Are lights alive in the blue sky.

In our light bitter world of wrong
They come; God gives us them awhile.
His speech is in their stammering tongue,
And his forgiveness in their smile.

Their sweet light rests upon our eyes.
Alas! their right to joy is plain.
If they are hungry Paradise
Weeps, and, if cold, Heaven thrills with pain.

The want that saps their sinless flower
Speaks judgment on sin's ministers.
Man holds an angel in his power.
Ah! deep in Heaven what thunder stirs,

When God seeks out these tender things
Whom in the shadow where we sleep
He sends us clothed about with wings,
And finds them ragged babes that weep!