A HERO OF OUR TIME - Photographer MARTIN RIETZE and the volcanoes.

Few people in the world who thinks that they are lucky if they were close to the outbreak of the eruption of its volcano. However, there are those who are easily satisfied with a holiday in the office on this issue. This so-called "hunters of volcanoes." These concerns and photographer Martin Rietze. However, about it many times already published articles.

His creepy hobby that has become the main work is unlikely to impress anyone. Yes, and it can be envied, because a man does what he likes, which he dreamed of since childhood.

The first active volcano that shook the imagination of a young boy, was the famous Sicilian Etna, and love for monitoring volcanoes could not break even at the risk of death of such a career choice.

But the choice of the profession, in turn, contributed to, and long-standing fascination with Martin mountaineering, which he currently recognizes more dangerous sport than "jogging" next to the volcanoes.

Photographer traveling around the world, from Costa Rica to Italy in search of hot spots, in the truest sense of the word, eager to blast powerful electrical storms and the sea of ​​boiling lava, in order to capture these moments in the frame.

Each meeting with the eruption, he relishes, and describes it this way: "When you stand next to a huge, strong, volcanoes, and your body feels like shaking the earth, pass through the shock wave, then you have a feeling of fear, but a deep satisfaction, a sense of what something natural and important - it is an incomparable pleasure. "

"And this is not the same thing as guided tours, where the tour guide knows how to hold the group that none of its members are not subjected to the slightest danger. It knows it is a conductor, and you know, you just look blankly and looking at something majestic, what is happening so close but so far away.


Photographer also invests in the image and soul closer so that the shoots. I think any dreams of photographing volcanoes! "

Their travel plans in advance, Martin always, but in its main business is to monitor volcanoes in the period of peak activity and the calculation of the start and end of the eruption.

He even admitted that to get good shots have to lay the two weeks since the eruption of account may begin at any time, day or night, and thus have to wait until then, until you see something really impressive. Sometimes this requires a whole night out.

According to the photographer, to each individual volcano needs its own approach, but nevertheless gives preference stratovolcanoes, cones, lava flows are composed of alternating layers of lava fragments, have turned to the tuff.


This lava from the wreckage spread out for miles, forming a pyroclastic flow.

Mainly, there are volcanoes along the boundaries of tectonic plates. 328 of the existing terrestrial volcanoes are located in the Pacific Ocean, forming a volcanic Pacific Ring of Fire, this is where almost all of the most powerful earthquake in the world.

One can safely say that the most sympathetic to Martin Rietze so-called red volcanoes, volcanic eruptions capable of, characterized by outpouring of lava on the surface and its subsequent progress on the slopes of the volcano. By emissions of gas lumps of molten rock flying into the crater in a picturesque fountain of fire. And if the eruption of the volcano is red at night, it can often be compared to the fireworks. These lava flows and the pyrotechnics can be seen as a fairly close range, if put on the mask, helmet and protective clothing. However, all the techniques necessary to immediately hide because it is just messed up.
"I feel like watching the natural fireworks of the Earth" - says on its work to a photographer.

Let us, and we watch them, enjoying his work.

This photograph, taken in December 2009, shows a glowing lava lake inside the crater of the volcano Villarica in southern Chile. The shooting was at dawn, but despite this, it was possible to observe the Moon.

Kawah Ijen Volcano in Indonesia in June 2008. This volcano is extremely acidic crater lake, and perhaps the strongest in the world's output of sulfur. There's so hot that ignites the gray leading to burning rivers.

Sakurajima volcano in Japan. January 2010. The photographer managed to capture the electrical discharges, which is very much appreciated in the scientific community.

Nyiragongo Volcano in the Great Lakes in Africa. In the center of the crater lake of lava is that it rises, then falls. Down to it is extremely dangerous without special equipment, because you can choke on the fumes and gases.

The volcano Eyjafjallajökull, Iceland. May 2010. The volcano, which could paralyze much of Europe.

The same  volcano Eyjafjallajökull, Iceland. May 2010.

This photo was taken in January 2010, the volcano Sakurajima near Kagoshima in southern Japan. The volcano threw out lava and created a fork of lightning - it is possible that this was due to due to electrically charged ash.

In order to capture the data flash, Martin needed all his experience gained over the years.

Caldera, a volcanic lake in unusual colors Rinjani on Lombok Island in Indonesia. August 2009. The volcano has three subkratera. This lake was the result of the collapse of the slope of a volcano subkratera. 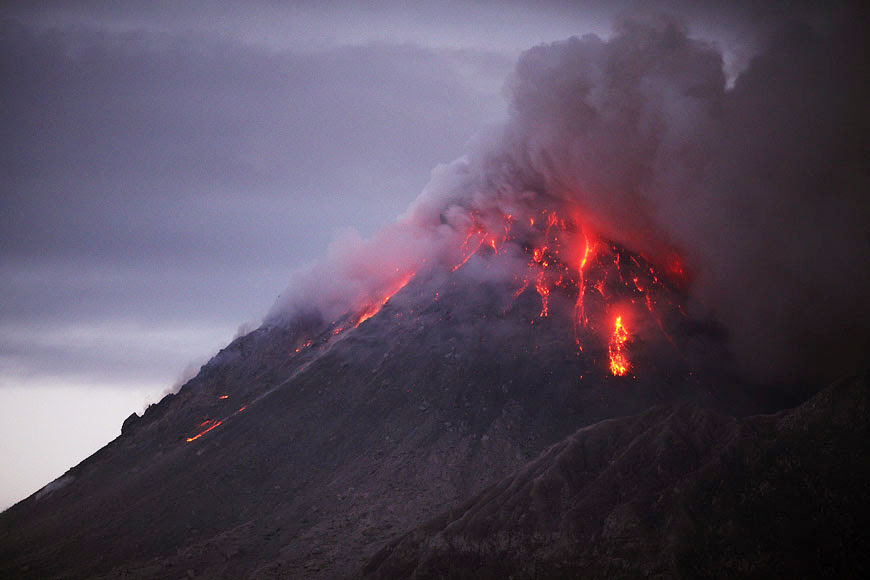 The complex of Soufriere Hills volcano on the island of Montserrat. Due to the constant eruptions of the volcano island was abandoned by two thirds of the population.

Sakurajima volcano in Japan. Since the volcano welcomed the New Year 2010 (five minutes after midnight).

Stromboli volcano near Sicily. One of its regular eruptions in May 2009. 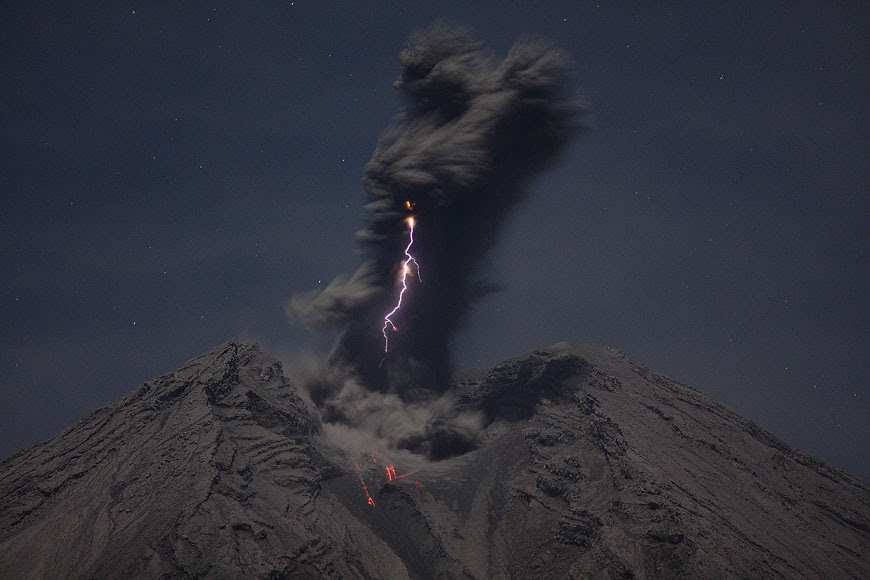 Semeru volcano in the densely populated island of Java volcanoes in Indonesia. June 2006. This volcano - the highest point of the island (about 3700 meters). 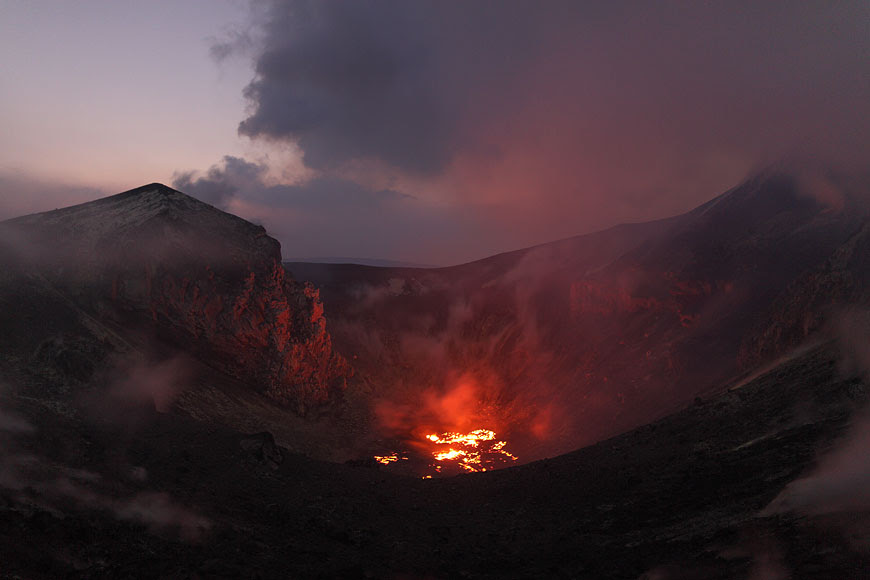 The volcano Krakatoa in Indonesia, located between the islands of Java and Sumatra. August 2011. This volcano has grown on the site of the old, destroyed the strongest eruption in 1883, the force of the explosion which is 200 times the force of the explosion, which destroyed Hiroshima, and got a new cone height of 181 meters is almost twenty years. His current height is about 300 meters with a diameter of 4 kilometers.