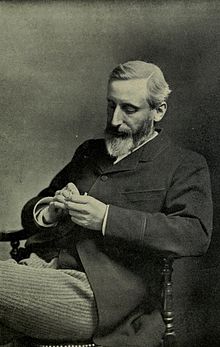 
Charles Grant Blairfindie Allen  was a Canadian science writer and novelist, and a proponent of the theory of evolution.

Allen was born near Kingston, Canada West (now incorporated into Ontario), the second son of Catharine Ann Grant and the Rev. Joseph Antisell Allen, a Protestant minister from Dublin, Ireland. His mother was a daughter of the fifth Baron of Longueuil. He was educated at home until, at age 13, he and his parents moved to the United States, then France and finally the United Kingdom. He was educated at King Edward's School in Birmingham and Merton College in Oxford, both in the United Kingdom. After graduation, Allen studied in France, taught at Brighton College in 1870–71 and in his mid-twenties became a professor at Queen's College, a black college in Jamaica.

Despite his religious father, Allen became an agnostic and a socialist. After leaving his professorship, in 1876 he returned to England, where he turned his talents to writing, gaining a reputation for his essays on science and for literary works. One of his early articles, 'Note-Deafness' (a description of what is now called amusia, published in 1878 in the learned journal Mind) is cited with approval in a recent book by Oliver Sacks.

His first books were on scientific subjects, and include Physiological Æsthetics (1877) and Flowers and Their Pedigrees (1886). He was first influenced by associationist psychology as it was expounded by Alexander Bain and Herbert Spencer, the latter often considered the most important individual in the transition from associationist psychology to Darwinian functionalism. In Allen's many articles on flowers and perception in insects, Darwinian arguments replaced the old Spencerian terms. On a personal level, a long friendship that started when Allen met Spencer on his return from Jamaica, also grew uneasy over the years. Allen wrote a critical and revealing biographical article on Spencer that was published after Spencer was dead.

After assisting Sir W. W. Hunter in his Gazeteer of India in the early 1880s, Allen turned his attention to fiction, and between 1884 and 1899 produced about 30 novels. In 1895, his scandalous book titled The Woman Who Did, promulgating certain startling views on marriage and kindred questions, became a bestseller. The book told the story of an independent woman who has a child out of wedlock.

In his career, Allen wrote two novels under female pseudonyms. One of these was the short novel The Type-writer Girl, which he wrote under the name Olive Pratt Rayner.

Another work, The Evolution of the Idea of God (1897), propounding a theory of religion on heterodox lines, has the disadvantage of endeavoring to explain everything by one theory. This "ghost theory" was often seen as a derivative of Herbert Spencer's theory. However, it was well known and brief references to it can be found in a review by Marcel Mauss, Durkheim's nephew, in the articles of William James and in the works of Sigmund Freud. The young G. K. Chesterton wrote on what he considered the flawed premise of the idea, arguing that the idea of God preceded human mythologies, rather than developing from them. Chesterton said of Grant Allen's book on the evolution of the idea of God "it would be much more interesting if God wrote a book on the evolution of the idea of [Grant] Allen".

He was also a pioneer in science fiction, with the 1895 novel The British Barbarians. This book, published about the same time as H. G. Wells's The Time Machine, which includes a mention of Allen, also described time travel, although the plot is quite different. His short story The Thames Valley Catastrophe (published 1901 in The Strand Magazine) describes the destruction of London by a sudden and massive volcanic eruption.

Grant Allen died of liver cancer at his home on Hindhead, Haslemere, Surrey, England on October 25, 1899. He died before finishing Hilda Wade. The novel's final episode, which he dictated to his friend, doctor and neighbor Sir Arthur Conan Doyle from his bed appeared under the appropriate title, The Episode of the Dead Man Who Spoke in the Strand Magazine in 1900.

THE EPISODE OF THE MEXICAN SEER

THE EPISODE OF THE DIAMOND LINKS

"Thursday, 6 a.m.
"DEAR LADY VANDRIFT—Will you kindly excuse our having gone off hurriedly without bidding you good-bye? We have just had a horrid telegram to say that Dick's favourite sister is dangerously ill of fever in Paris. I wanted to shake hands with you before we left—you have all been so sweet to us—but we go by the morning train, absurdly early, and I wouldn't for worlds disturb you. Perhaps some day we may meet again—though, buried as we are in a North-country village, it isn't likely; but in any case, you have secured the grateful recollection of Yours very cordially, JESSIE BRABAZON.
"P.S.—Kindest regards to Sir Charles and those dear Wentworths, and a kiss for yourself, if I may venture to send you one."

THE EPISODE OF THE OLD MASTER

"Oh, you innocent infant!
"Bless your ingenuous little heart! And did it believe, then, it had positively caught the redoubtable colonel? And had it ready a nice little pinch of salt to put upon his tail? And is it true its respected name is Sir Simple Simon? How heartily we have laughed, White Heather and I, at your neat little ruses! It would pay you, by the way, to take White Heather into your house for six months to instruct you in the agreeable sport of amateur detectives. Your charming naivete quite moves our envy. So you actually imagined a man of my brains would condescend to anything so flat and stale as the silly and threadbare Old Master deception! And this in the so-called nineteenth century! O sancta simplicitas! When again shall such infantile transparency be mine? When, ah, when? But never mind, dear friend. Though you didn't catch me, we shall meet before long at some delightful Philippi.
"Yours, with the profoundest respect and gratitude,
"ANTONIO HERRERA,
"Otherwise RICHARD PEPLOE BRABAZON."

Charles laid down the letter with a deep-drawn sigh. "Sey, my boy," he mused aloud, "no fortune on earth—not even mine—can go on standing it. These perpetual drains begin really to terrify me. I foresee the end. I shall die in a workhouse. What with the money he robs me of when he is Colonel Clay, and the money I waste upon him when he isn't Colonel Clay, the man is beginning to tell upon my nervous system. I shall withdraw altogether from this worrying life. I shall retire from a scheming and polluted world to some untainted spot in the fresh, pure mountains."
"You must need rest and change," I said, "when you talk like that. Let us try the Tyrol." 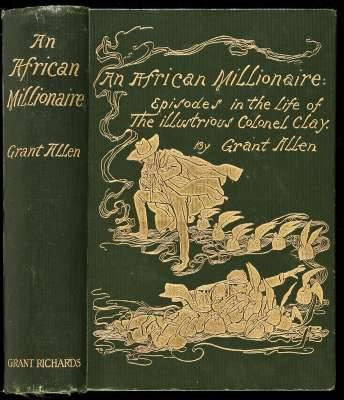